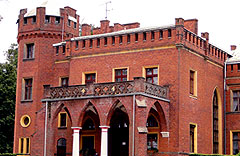 Traditionally, fairy tales start in the following way: ‘once upon a time, far away behind forests and mountains …’. And despite the fact that the Castle is a magical place, its history seems to be utterly realistic. Its origins date back to the 14th century when the manor farm in Karnity was mentioned for the first time in the privilege charter of the village of Bożęcin. One century later, Hans von Schönaich became the owner of the mansion as a reward for service in the army of the Teutonic Order.

The Schönaich family took care of the property for three hundred years and subsequently the manor farm in Karnity was sold to baron van Albedyhll in 1815. That family managed and administered the manor farm in a very effective manner, and its surface area reached the level of nearly 2,300 hectares at the beginning of the 20th century. The property was subsequently transferred to the von Gunther family upon the end of the First World War.

The history of the Castle is also related to numerous accounts concerning fights and destruction. Karnity was burnt down during the Polish-Swedish wars around 1635, whereas the present-day palace was erected in 1856 basing on a neo-gothic style, which perfectly reflects the charm and magic of romanticism. The aspects which are exceptionally enchanting in respect of the block mass of the Castle are its varied storey-structure and the towers, i.e. the octagonal corner tower situated from the forecourt and the quadrilateral tower situated from the lake. The arcade of the main entrance is crowned with a cross vault – an element which is highly characteristic of the gothic style. The terrace balustrades are made of artificial stone and are additionally adorned with an ornament of a quatrefoil and fish bladder. Furthermore, the Castle boasts the original woodwork and fireplace, as well as the beam-framed floors visible in the representation rooms. The castle is clad completely with clinker brick.

The facility appears to be amazing in terms of its architecture. Every year, the owners make all efforts to undertake essential redecorations and they are consistent in not interfering in the historic climate of the interior. The old manège was adapted for a hotel boasting a wonderful ballroom, which is primarily admired for its open suspended wooden rafter framing, characterised by marvellous and rich woodcarving. The premises also house an atmospheric winery (previously acting as an ice house) and remains of walls, stone steps and trees, which seem to preserve every single detail of the entire history of the place. The hotel part is complemented by holiday cottages, whereas guests may rest in the facilities prepared for barbecue parties or bonfire, in Bajkowy Świat Kłobuka, as well as at the lake. Moreover, you can also visit the extensive area around, i.e. forests, canals, rivers and surrounding villages and towns. What does the future hold? Time will tell what the future holds.